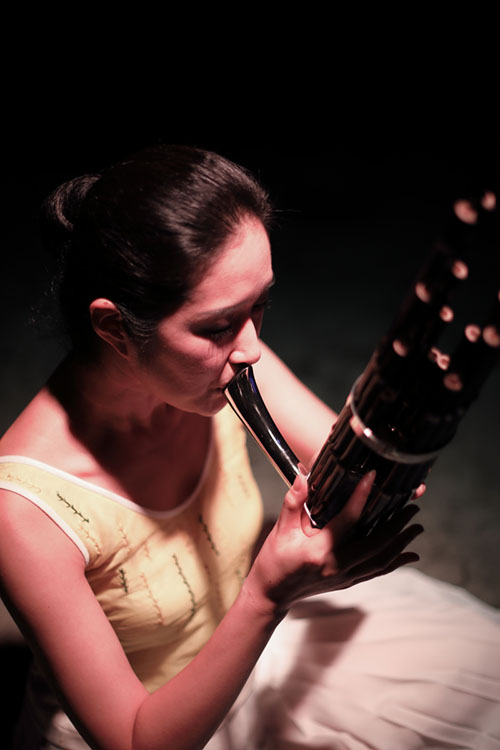 Se-piri solo for Yeongsanheosang
A traditional court music piece, Yeongsanhoesang has undergone continuous change with the current version taking form sometime in the 19th century. While the genesis of the suite is not completely certain, the first piece of the suite, “Sangryeongsan” appears to be the foundation piece for the suite. “Sangryeongsan,” the slowest and longest piece in the suite, progresses gracefully and gently like the flow of water. The following 7-8 pieces in the suite include variations on “Sangryeongsan,” as well as standard musical forms and dance pieces of the Joseon era (1392-1910).

Uncertain way for Saenghwang solo
This is my solo improvisation to discover new inspirational sounds in this uncertain time. During the continuing Covid-19 global pandemic, we in New York have been confined to home for nearly a year. Music became my only form of prayer.

Piri solo in Gyemyeon-jo
gamin’s solo improvisation is tuned for a Korean traditional pentatonic mode, gyemyeon-jo (界面調), which is often used for music from the southwest. It is said to evoke softness and sad feelings and is commonly used to express ”Han” (恨), a term to describe an accumulated sadness or bitter resentment or frustration owing to social discrimination and political disenfranchisement. One characteristic of han is that it cannot be released or healed but, at best, becomes a source of inspiration and innerstrength through which to overcome one's difficulties.

Taepyungso Melody for Gut
Improvised melody based on Korean traditional music, nongak (or pan-gut), which is considered as a whole, therefore, we can see that it is done to encourage the farmers as they work, and to drive away evil spirits. This ceremonial music is used in shaman rites, and that nongak (Gut) were originally synonymous words, shows a close link between the two forms of music and ceremony. Pankut held in an open area as popular entertainment (Nong-Ak) is a variety of music, dance, acrobatics and singing performance.