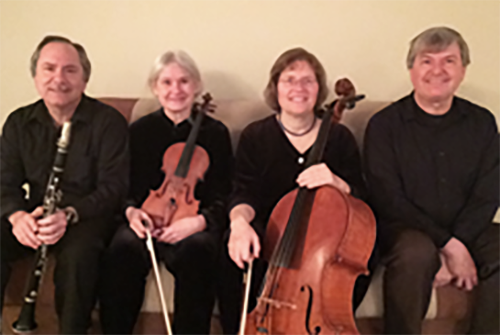 Rebecca Eckfeld is a graduate of Eastman School of Music, where she studied with Millard Taylor (violin) and Francis Tursi (viola). She has been a member of the Rochester Philharmonic, Fort Worth Symphony and Opera Company, Oklahoma Symphony, Dallas Symphony Orchestra, Dallas Ballet Company, New Hampshire Music Festival, Opera Orchestra of New York, and the Frohlich-Eckfeld Duo. At present, Rebecca is a member of the Queens Oratorio Society Chamber Orchestra, St. Thomas Orchestra, the Eckfeld Duo, Norwood Trio, Trio D’Été and the Wilderness Quartet. In addition to performing, she has a private studio of violin and viola students.

Carole Tilson graduated from New England Conservatory, where she studied with Lawrence Lesser. She previously studied with Stephen Kates at the Peabody Conservatory, and during the summers was a student at Tanglewood and Aspen music festivals. She was a member of the Orquesta Sinfonica de Veracruz in Veracruz, Mexico. In New York Carole has played with orchestral groups including the Brooklyn Philharmonic, Hudson Valley Philharmonic, Municipal Concerts Orchestra, as well as the New York Gilbert and Sullivan Players and Queens Oratorio Society Chamber Orchestra. In addition to playing with Trio D’Été, she is also a member of the Norwood Trio.

William Eckfeld was the orchestra director at White Plains High School from 1987-2013. A graduate of Eastman School of Music, he was a member of the Rochester Philharmonic Orchestra and Dallas Symphony Orchestra before beginning his career in music education. William also studied at the Hochschule für Musik und darstellende Kunst in Graz, Austria, and earned his Masters degree from Lehman College in New York, where he studied composition with John Corigliano. William serves as organist at Holy Trinity Lutheran Church in New Rochelle. He is also principal bass and assistant conductor of the St. Thomas Orchestra and serves as conductor and musical director of the Westchester Community Orchestra.

Steven Miller is a graduate of Manhattan School of Music and The Juilliard School, where he studied clarinet and saxophone with Charles Russo and Joseph Allard. He has performed throughout the New York metropolitan area including performances with the New York Gilbert and Sullivan Players, Philharmonia Virtuosi, and the national company of Jesus Christ Superstar. After teaching music in the North Rockland Central School District for 29 years, Steven recently retired as the band director from Fieldstone Middle School. He currently performs with the Adelphi Symphony, and is a founding member of the Norwood Trio.