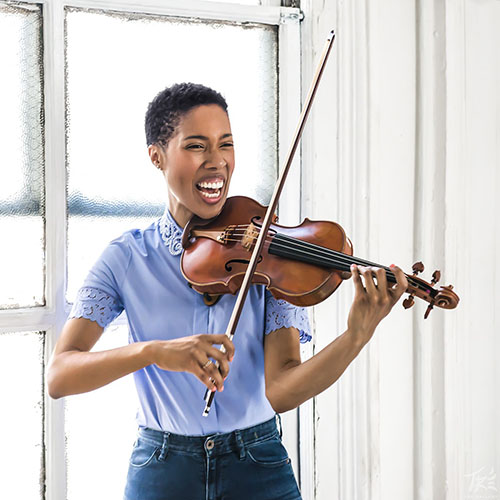 REENA ESMAIL  –  When the Violin

Partita for Solo Violin (2011)
Andre Myer (b.1973)
I composed my solo violin partita during the summer of 2011, while studying the solo violin suites and partitas of J.S. Bach. I remember being moved by how Bach was able to create a narrative and harmonic journey with just one instrument puzzling through a pretty strict form. That summer of study and composing taught me how the harmonic narrative of movements from a Baroque dance suite is like waves in the ocean, first flowing onto the shore before ebbing back into the sea. For me, that most elemental of stories, venture and return, is what makes the Baroque dance suite so special. Composing a new piece informed by Baroque dance music is a special treat because it brings the energy and vitality of our time to this early style of playing, and hopefully provides each of us a new way of knowing an old truth: music abides with our species, inspiring us across the centuries, no matter what life may throw our way.
Notes by Andre Myers

Blue/s Forms (1979) I. Plain Blue/s
Louisiana Blues Strut (A Cakewalk) (2002)
Coleridge-Taylor Perkinson (1932-2004)
Perkinson’s diverse career must be positioned against the racially restricted world of classical music. He received an academic training in composition, studying with Vittorio Giannini at the Manhattan School of Music and Earl Kim at Princeton University. Yet he refused to enter the isolated world of academia, preferring instead a diverse array of musical jobs. He produced a great deal of “high art” music, but he was equally well-versed in jazz and popular forms: he briefly served as pianist for drummer Max Roach’s quartet and wrote arrangements for Roach, Marvin Gaye and Harry Belafonte. One level, Blue/s Forms and Louisiana Blues Strut are sophisticated works for solo violin that both visually and aurally remind one of virtuosic compositions dating back to Bach’s Sonatas and Partitas. The pieces also draw attention to the correspondence between the repetitive harmonic scheme of the blues and that of Baroque forms such as chaconne and passacaglia. However, Blue/s Forms (and its successor) is also a subtle commentary on the blues, invoking that genre’s varied origins and formal components while blending it with the traditions of classical solo composition.
Notes by Gregory Weinstein, PhD (excerpted from Coleridge-Taylor Perkinson A Celebration album notes)

Ribbon for Solo Violin (2020)
Angela Morris
Ribbon's title could refer to magnetic tape in a cassette garbling, rewinding, and decaying. A visual association: ribbons whipped and swirled by rhythmic gymnasts. And a stream, a current. Through the creative thinking and swift action of composer Gabriela Lena Frank, composer Angela Morris and violinist Monica Davis were connected. Frank paired past composer fellows, like Angela, from her Creative Academy of Music with performers who lost work due to the pandemic. The result was a weekly set of brand new music online called #GLFCAMGigThruCOVID. There is lots of new music already out there as a result, and you can find it all here. The SF Chronicle reported on the initiative. Monica gave the virtual premiere of Ribbon in May 2020.
Notes by Angela Morris

Journal Entry (2020)
Jonathan Bailey Holland (b.1974)
Originally written last year for a Black History Month performance at the Detroit Institute of Arts curated by Grammy-nominated violinist Jannina Norpoth. The concert titled “Transitive Vision,” explored how we envision our past, present, future and ourselves — tying into how we embrace our history, our spirituality and our identity.
Notes by Jannina Norpoth

When the Violin (2020)
Reena Esmail (b. 1983)
Sometimes a poem just reaches into your chest and grabs your heart. That was my feeling the first time I read Daniel Ladinsky’s translation of Hafiz’s beautiful poem that begins “when the violin | can forgive the past | the heart starts singing.” At the moment I first read this poem, I was working on a piece for choir and cello. I scrapped the entire thing and started over, setting this text. The opening of the choral piece is a cello solo that feels like a series of questions. It searches for that forgiveness that makes the heart sing. The solo violin version sat in sketches for years — and finally came to life at the perfect moment. My husband, Vijay Gupta, gave the 2020 Nancy Hanks Lecture on Arts and Public Policy for Americans for the Arts. He decided to open the lecture, given remotely in a pandemic and amidst the deep racial issues in America, by talking about forgiveness — and by playing this piece. The violin is in a Hindustani (North Indian) raag called Charukeshi. I love this raag because it is so simple, and yet it can reveal emotions that range from the depths of darkness to the most beautiful, piercing light. It feels like winding through a mountain pass at sunset — it can be just a few steps between shadow and blinding light, between the tightest crevasses and vast, breathtaking vistas. To me, Charukeshi is the sound of the soul cracking open. Notes by Reena Esmail