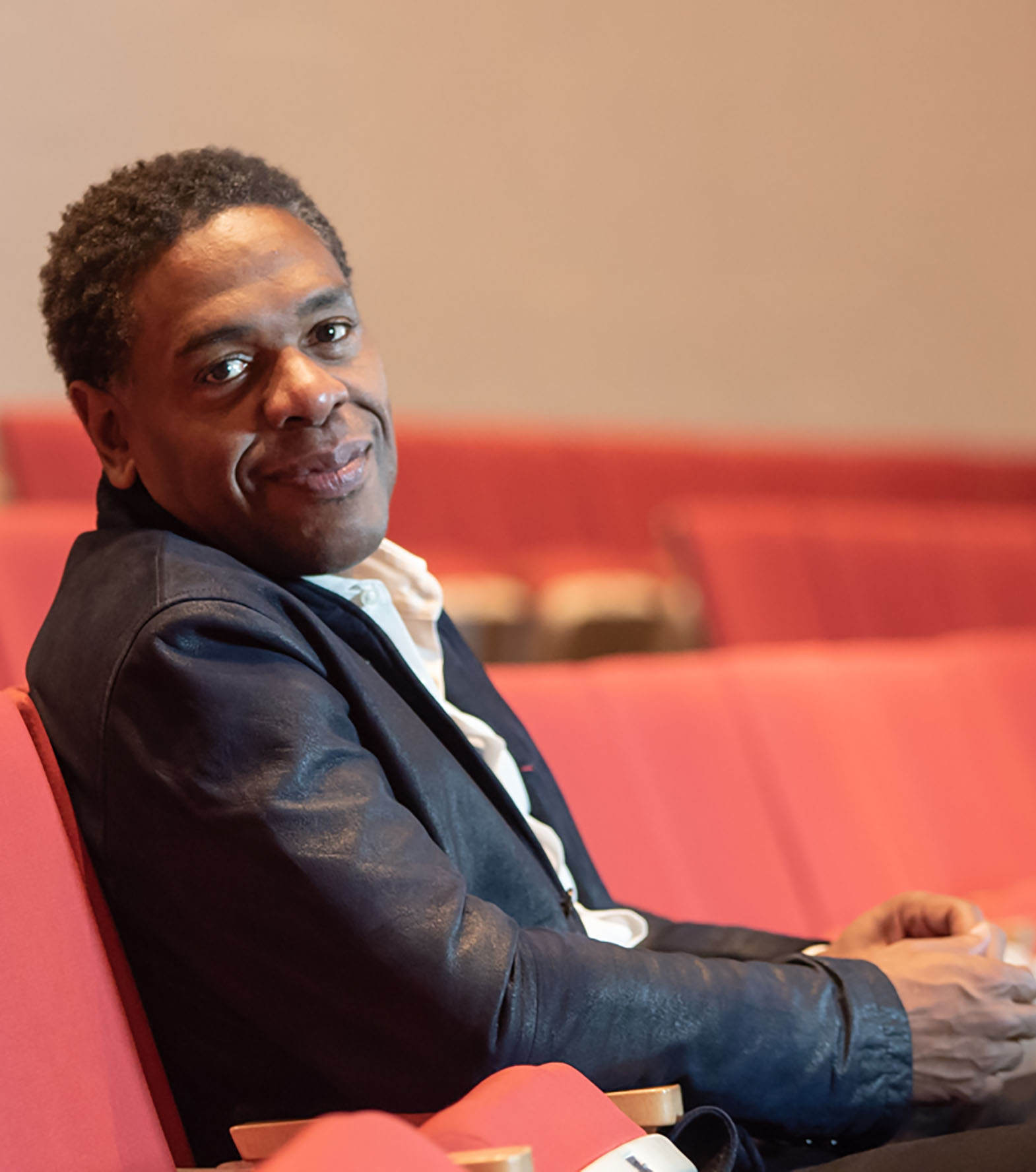 Congratulations to Terrance McKnight on being named one of Musical America's Top 30 Professionals of the Year!

WQXR evening host Terrance McKnight talks about his new concert series at Merkin Hall, “Only at Merkin with Terrance McKnight,” which features pianist Ursula Oppens, harpist Bridget Kibbey and pianist André Watts. He discusses his unique approach to sharing classical music with listeners, and some of the formative experiences that made him who he is today.

Tell us about “Only at Merkin with Terrance McKnight.”
The reason that I chose these three artists was passion – musicians and perspectives we were both passionate about.  All three artists convey the kind of intimate evenings we’re creating. Given its design, Merkin Hall is perfect for the up-close feel you’ll get not only from the music, but also from the conversation.

We’ll be celebrating a big anniversary for Ursula Oppens: her 75th birthday. She has such strong connections with working composers and will give the world premiere of a piano quintet by Laura Kaminsky. When you’re talking about André Watts, you’re talking about somebody who’s played everything from Scarlatti to contemporary music. With Bridget Kibbey, you’re getting a different generation and a different instrument. She will certainly have something unexpected to say.

The performances will include conversations with the artists. How will that work?
For me, music making has always been kind of organic, and that’s what I want the experience to be.  I want our conversation to lead into the music. I don’t want it to necessarily be a concert and then conversation. I think I’m going to bring out some humor with these folks. We oftentimes think of classical musicians as being very dedicated and very serious in the practice room by themselves. We don’t really get to see so much a different side of them – the side that keeps them going, that’s fun. The side that makes them just like ordinary folks.

What questions have you always wanted to ask these artists?
I think aside from hearing Ursula Oppens play, we’ll get a sense of how she grew up, what was important to her, how and why she programs what she programs, and how it interacts with everyday life, with everyday people. I think hearing musicians talk about that is important.

I want to ask Bridget Kibbey about harp technique, because the harp really changed in the 20th century. I’m curious as to how someone with a harp that was constructed maybe 100 years ago or 50 years ago deals with Bach, and the instrument that Bach was writing for. I want to get a sense of the history and lineage of her instrument and the lineage of harp technique. I’m very curious about that.

André Watts doesn’t talk a lot. You don’t find many interviews with him. So I think the audience will get some insight into this man’s career that’s been going on since 1963. We’ll get to actually hear his voice, to hear why he does what he does. I want to talk to André about what it was like for him as a 10 or 11-year-old practicing, and what his mother would say if she was listening to him practice. And mistakes that he made and challenges that he had.

Why is it important for the classical music world to diversify both its performers and its programming?
The survival of the music depends on it. The issues of diversity and inclusivity are deeply rooted in America’s segregationist past. It’s hard to effectively change something that’s been so deeply rooted in segregation. I mean, when we think about the early orchestras in our country, the concert halls weren’t inviting people of color. And even now you still may have an orchestra that only has one or two people of color, so we’re still talking about two or three percent in the orchestra. Maybe there’s something about human nature, that people revel in seeing  a reflection of themselves on stage.

And yes, we have to diversify the programs to represent many more cultural expressions. The programming is one thing, but then to diversify who is seen on stage is an additional factor. And I also think that he ethos of the concert experience needs to feel more American. It still feels foreign to a lot of us. Even for people who have been going to a concert hall for years, it still feels like one is stepping into a different world. When you go to a basketball game, or a hockey game, it feels like an extension of American life. But something about the concert hall feels a little different, a little foreign, and I think we have to alter our concert experience to feel more like home.

How do you make people feel more at home with classical music?
That’s always been important to me. I grew up not so much in classical music, but in church. With my father being a pastor and me being involved with the music program, it was my job to make people feel welcome, whether it was doing music or through a hello when they’d come to the doors. There was this mandate to make people feel welcome and inviting them, so as a musician I would always search for a language where performing and talking about music would make people feel like they belong. So as host of “Only at Merkin with Terrance McKnight,” that’s my desire: To look around that room and try to find a way to make everybody feel like what’s happening on this stage is about leaving no one out.

Who were your most important mentors?
As a kid I was attached to my sister, who forced me to love words and speak up. And my brother encouraged me to be tough in a very interesting way. When I was in high school he started a body shop, so we would work on cars. So I went home from school, and I would work on cars in the cold. I remember going to college, and there were times when the heat would be out in the practice rooms. But because I’d worked on cars in the cold, I was able to practice. So my brother really taught me a lot about endurance and perseverance, which became so important when I got to music school because there were so many kids who were much more talented, and I just kept going.

I came across André Watts when I was in school. I looked at his career and would try to read everything I could about him, because he was the one person of color who made it through in a big way as a pianist. I would show up at his concerts when he was in state or out of state, and I’d try to keep up with him and get advice from him whenever I could, and emulate him. It was so important for me to be able to go backstage and speak to André Watts. I can’t overemphasize what it meant for him to listen to me play, or to remember that I had a hand injury, and he’d give me advice, and to tell me to go listen to this record. It just gave me the courage to keep going.

What do people not know about you that might surprise them?
What they don’t know, perhaps, is that I really love hot weather, like the South. Like going outside and planting stuff and watching things grow and getting my hands in the dirt. I like the outdoors, riding ATVs, that’s what I enjoy.

I think that music for me was a means to an end, in that for me it has always been about communication. That very early seed that was planted by my parents, bringing people together and making them feel joy. It’s always been primarily who I am, so in music I found a language that did that. I’ve always been interested in the play between voice and speaking and music. That’s what church was about, I guess. And so that balance, helping people to walk out feeling better than they did when they walked in, is important to me.

[Editor’s Note: Terrance neglected to mention in this interview that he was featured as the most eligible bachelor in media, along with BET’s Kelly G. Griffin and CNN host Don Lemon, by Gotham Magazine in 2014.]

What experiences have most profoundly impacted who you are today?
Number one was going to Morehouse College. That changed my life and made me see that everything was possible. It made me see life in a completely different way. It was a place where it was okay to be intelligent and hard-working and black, and it was okay to be generous and kind and spiritual. It showed me images of all these different ways that I could be and to find my own space and be comfortable in that space. I didn’t really know that existed. I hadn’t seen all of those models before.

And then, I was in graduate school [studying piano performance] when I had a hand injury. Working at a restaurant, something fell on my hand and I couldn’t play for about a year and a half. Which meant I wouldn’t graduate, because I had to play at my graduation recital. And this is where André Watts really kicked in for me, because I saw him a couple of times during my injury, and he improvised with me, he talked to me about it. And then when I got better, he listened to me play. And that was just tremendous. So having that hand injury and not being able to play showed me how important music was to me, and how important communication was, and allowed me to look at new ways to communicate. While I was recovering from my hand problem, I started listening to radio and analyzing scores. It allowed me to just take a seat, to kind of look around and check out the landscape, and really figure out where my voice would be best served. I kept waiting, kept analyzing, kept listening to the radio. So by the time I got out of graduate school, within a year I was working for NPR.