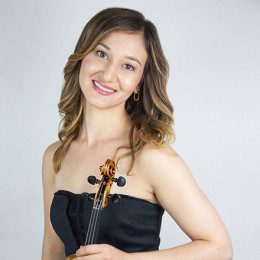 Violinist Sarah Franklin has performed throughout North America, South America, and Europe. An orchestral performance specialist, Sarah takes the stage regularly in Manhattan's most elite concert venues, including Carnegie Hall, Avery Fisher, and Alice Tully Hall. She was recently featured in the Strings Magazine July 2016 article, City Slickers, where she was interviewed about her performing and teaching career in New York City.

Ms. Franklin plays in the New York Pops Orchestra, Westchester Philharmonic, Distinguished Concerts International Orchestra (DCINY), Spectrum Symphony, and Empire Chamber Orchestra, and is Principal Second Violin of New York Festival Orchestra, Astoria Symphony, and Metro Chamber Orchestra, among others. Notable engagements include playing the Off Broadway revival of Sweeney Todd at Barrow Street Theater in 2017, touring from 2009-2010 as Concertmaster of the Broadway North American Tour of Camelot, playing in Mexico with Philharmonic Orchestra of the Americas for the 2010 Mexican Bicentennial, and performing under esteemed conductors Kurt Masur, Robert Spano, Sir Simon Rattle, and David Zinman.

In addition to her Classical music credits, Sarah enjoys performing with various Pop, Rock, and Contemporary artists. In 2017, she has had the honor of performing with Sir Paul McCartney, as well as playing on the Amazon Prime television series, Mozart in the Jungle. Motion picture credits include the film scores for LA 92, a documentary featured on the Discovery Channel, as well as Franny, starring Richard Gere and Dakota Fanning, which premiered at the Tribeca Film Festival in 2015. Sarah has played at Joe's Pub, Rockwood Music Hall, Le Poisson Rouge, BAM, Highline Ballroom, and the 92nd Street Y, and has recorded on the SONY Classical, EMI, and Bridge Record labels.

Ms. Franklin earned her Masters degree from Manhattan School of Music as a student of Curtis Macomber, and her Bachelors degree at the Oberlin Conservatory of Music, studying with Marilyn McDonald. Prior to her Conservatory training, she had the privilege of studying with the late Philippe Naegele, a prominent violin and viola soloist, and a founding member of the Marlboro Music Festival. Sarah resides in Manhattan, where in addition to performing, she is a violin faculty member at the Lucy Moses School at Kaufman Center, Bank Street School, and the Third Street Music School Settlement. She also maintains a large private lesson studio, where she enjoys teaching in her students' homes.