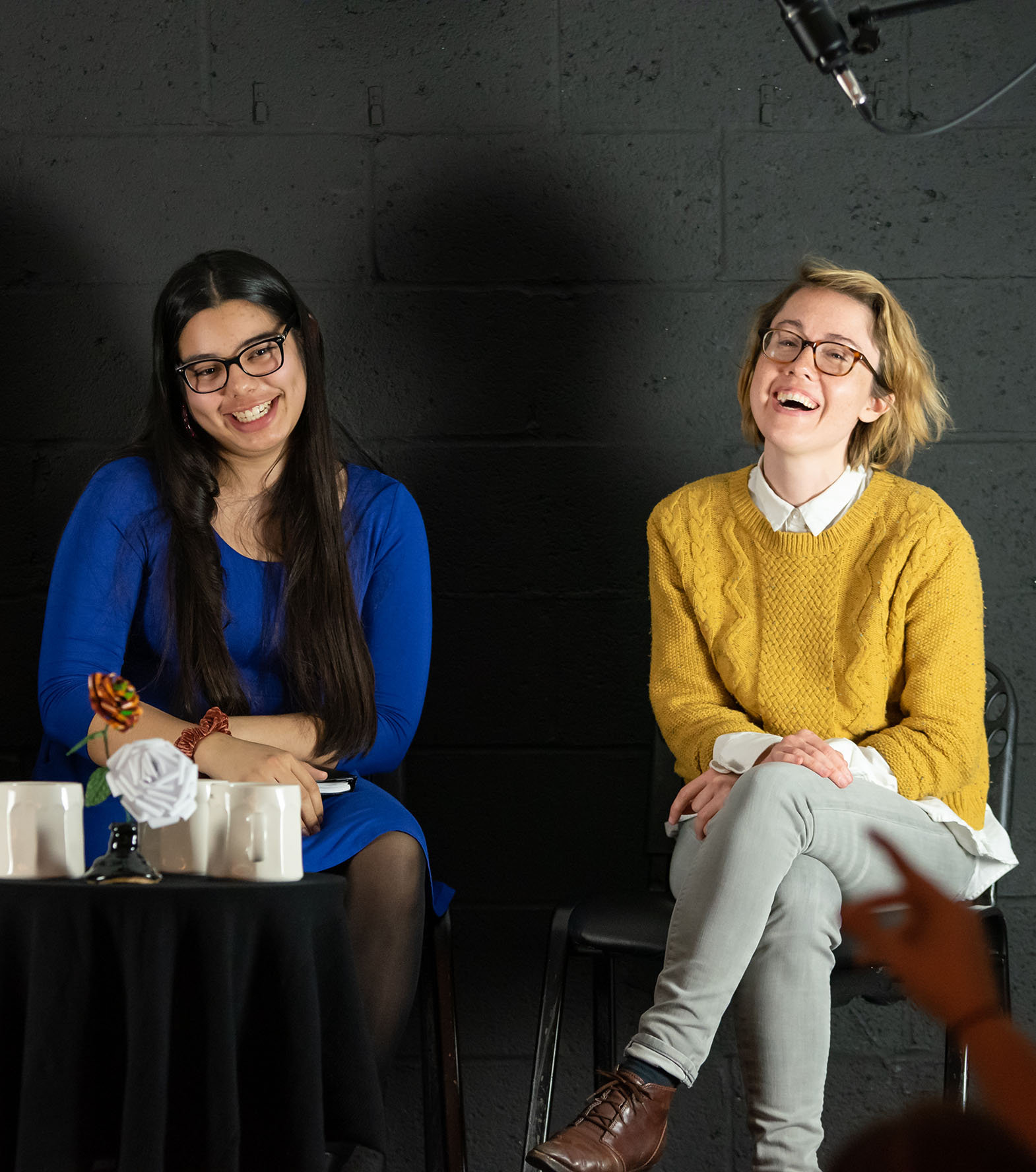 This spring, the vocalist, violinist, producer and Pulitzer Prize-winning composer Caroline Shaw is getting to know some of the young musicians at Kaufman Music Center’s Special Music School High School (SMS), a New York City public school that teaches music as a core subject. On April 3 she joined students Ciana Meyers and Christina Nelson (pictured with Caroline above) for a wide-ranging conversation about music, space and community. And on June 3, Shaw will perform at Kaufman Music Center’s 2019 Gala with the Special Music School Men’s Choir. Below, she discusses her current projects with SMS students, coming of age as a musician in the 21st century, and how music can foster empathy and respect.

The conversation series with SMS High School students that you're kicking off on April 3 gives them the opportunity to ask big, open, unanswered questions at the heart of the 21st century. What topics will you discuss?
What I think we’re going to do is have an open conversation about space, and what that means in terms of building or fostering or encouraging community. Not only physical spaces, but how do we think about the space between words or the space between people or the space between notes – all these ideas of how we can create an environment for creativity and support what we want to create. And through the lens not only of music but also of poetry. I want to ask the students questions about how and why they write, what that practice does for them, and what they’re interested in bringing to the world. I’m just incredibly excited and honored to get to be part of this school, and to get to know some of the students and faculty a little bit better. It’s a very unique combination of different angles of education.

Tell us about your upcoming performance with the SMS High School Men’s Choir at the Kaufman Music Center Gala on June 3. Get Gala details.
Today I got to visit the men’s choir, which was really inspiring. They sound just beautiful, and they were really open to different ideas, right away. You don’t always encounter that in every class. For the Gala performance, I’m making a new arrangement of a song that I’ve done a few times, and each time I’ve done it, it’s been completely different. There’s been one with orchestra, one with a quartet, and by myself. And this will be with the young men’s choir. The song is called “Find the Line.” It’s sort of about songwriting, and also about finding oneself. I’ve asked them to sing some different parts of the song, sometimes with words, sometimes without words.

Do you think that teens entering the field of music today are facing a different kind of musical landscape than you did at their age?
I think so. When I was in school or in college, I was pretty focused only on classical music. And now there are so many different genres that are blending, that are coming together. Young musicians have access to so many different ways of making music, and new ways of being creative as a musician. I look forward to seeing a musical landscape where performers are writing and creating their own music for each other and for themselves.

Being a musician in the 21st century involves navigating many different genres and types of music. As someone who has made music spanning many different musical territories, what advice would you have for young musicians?
I’d say listen to as much music as you can, and love as much music as you can. If you find something that you don’t love, or you don’t understand yet, but you know that somebody else does care deeply about it, spend more time with that thing. Maybe more time than with the thing that is easy for you to get into. Just be as open as possible, and know that there’s always something more to learn and understand. Be really open with your friends and your peers and your teachers and colleagues about what they love, and ask questions and listen to other people talk about what they care about.

We have to ask: What’s it like to work with Kanye West?
Again, there’s always something to learn. He’s a musician who works very differently from how I work, but I think we also sometimes have a lot in common in terms of being curious about different kinds of combinations of sounds. I like his insatiable curiosity. He’ll go in any direction if he finds it interesting.

Why is improvisation important for musicians?
For me, improvisation is really important in terms of accessing a kind of creative part of my musicianship. Rather than following the rules of what’s on the page, you completely forget written music, forget what’s on the page, and listen to your own intuition. Then, ultimately, as you get to be a better improviser, you can marry intuition with reason and make interesting improvisational decisions. But it’s also a great way to just try new things and try out different sounds. Every time I write music, even if I’m writing a piece that’s written down, it always starts with improvisation.

What is your composition process like?
It depends. It usually starts with some kind of harmony, which for me comes out easily at the piano or the keyboard. Sometimes it’s vocal too. If it’s for a singer, then the harmony usually comes first and then the vocal line comes on top of it – whatever feels natural.

Can music foster empathy?
Yes, I think music is able to touch something very deep within our emotions and minds that can definitely foster empathy. There’s also something about the relationship between composers and performers, and how for someone who’s never written music before, to try writing something can create a deep sense of empathy for a composer. And vice versa, for a composer to try playing something new and to realize someone else’s vision can create a deep sense of empathy for the performer so that together they develop a sense of trust. But there’s also something about communal singing where you are making sound in tandem or in harmony or in unison with another person or with many other people that invokes a kind of non-verbal empathy. There’s no way to describe what that is other than a deep unspoken connection. Communal singing is just one of the most peaceful and uplifting ways for people to connect with one another, and that’s sorely needed right now.

How can teenagers can use music as a means of engaging with issues of social and political justice?
There’s something very powerful about being able to write a song that is directly addressing a particular issue, or being part of a song or a piece of music that directly or indirectly addresses a social issue. I think there’s a huge responsibility for artists to do that, to be not just aware of issues in the world, but to find a way to speak to them in some way, and it’s going to be different for everybody. For myself, there are certain pieces where I’ve tried to in my own particular way to address something like the refugee crisis. I wrote “To the Hands” as a way to create a piece for a choir to sing, and for the choir themselves to be asking some of those questions.

Looking back at your music studies as a teen, is there anything you wish you’d had the opportunity  to learn at that point?
I’ve been really fortunate with the kind of musical education I’ve had. That said, I wish I had spent more time with musicians from different backgrounds and with different interests. I think Special Music School is a place where there are lot of different kinds of musicians, not just classical chamber music. I could just tell from being in the choir rehearsal today that the students are going in a lot of different directions, and they enjoy all of those things. I think that electronic music production would have been a really nice skill to have learned back then, but I taught myself along the way. There’s something about a classical music education that does give you the tools to focus on one thing and to dig really deeply into that. If you can then apply that kind of rigor to everything else in your life, then you can teach yourself quite a bit.

What are some of the most important things you’d like to share with the SMS students?
The importance of kindness and empathy in everything that you do, and respect for others, because you have to start from a place of respect for those around you, and then you can discover more about their world and more things to love. Again, it comes back to listening to people. The person sitting next to me, what are they thinking? What do they have to say? And if you’re a chamber musician, just knowing how to talk to your colleagues about music in a way that doesn’t put you at the center of the circle but puts the music as the center of the circle. If the conversation revolves around the music, then you can all learn together. Empathy, kindness, respect.

And finally, one thing most people may not know about you is that you’re a big fan of otters.
They’re the best meme on the internet. There’s something adorable and friendly about them. I fell in love with them when that first video of the otters holding hands made the rounds. I have some otter socks. I mentioned my otter socks to Anne Sofie von Otter recently, and she approved. They’re adorable creatures with a great sense of play. 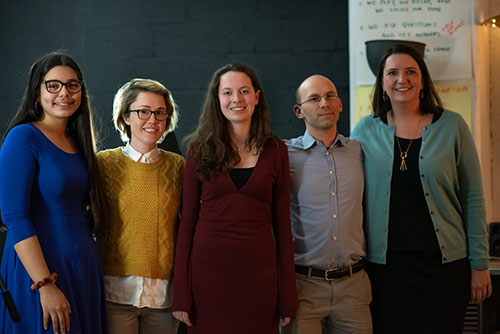