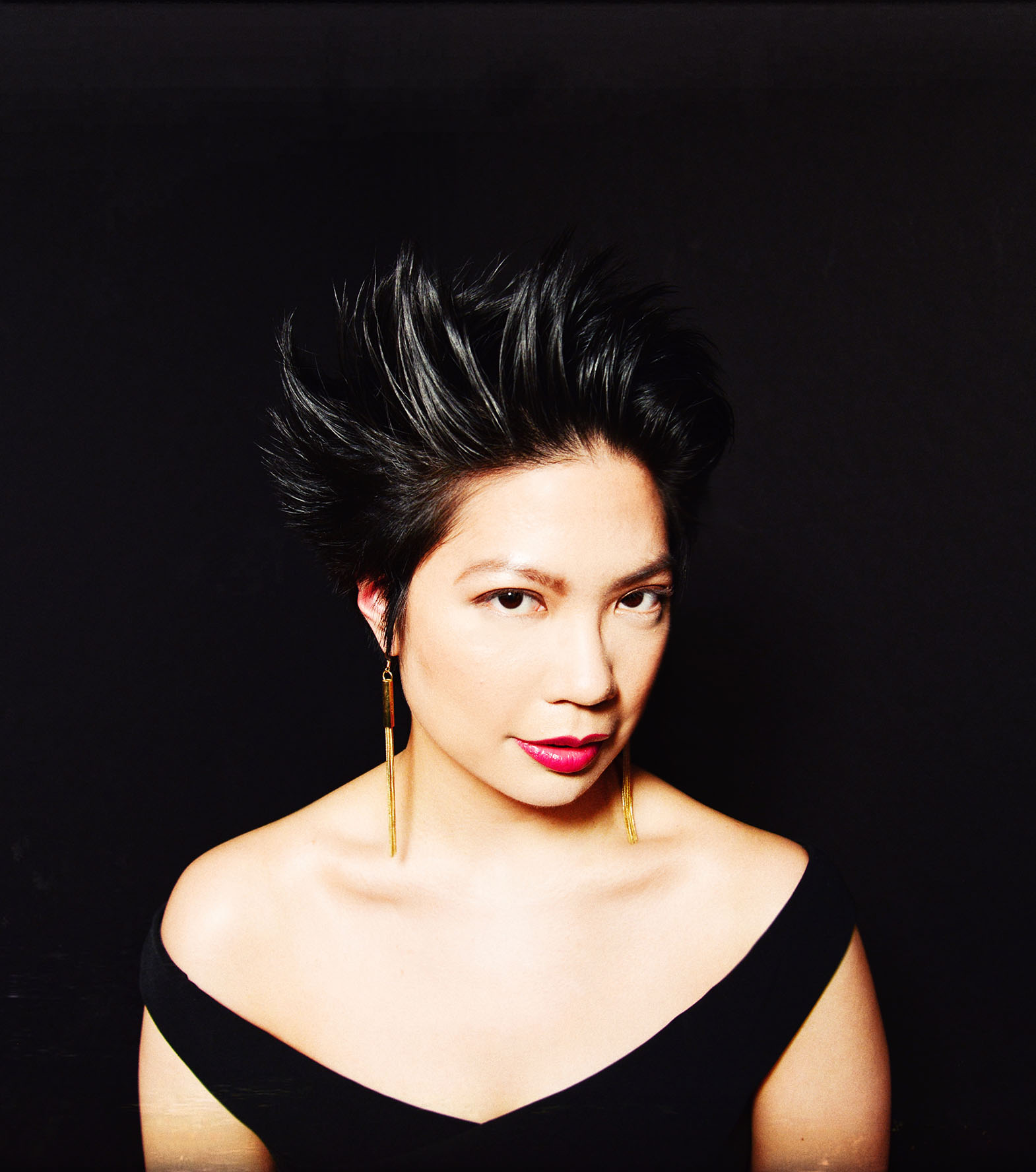 Adrianna with her songwriting student Athena Chuang at Roulette

How did the songwriting masterclass get started?
When we held this year's Face the Music auditions, a bunch of students sheepishly mentioned they sang, played another, typically non-classical instrument such as ukulele, or wrote songs after their violin or piano audition. Some faculty murmured they wanted to hear these other talents; I pointed out the need for a songwriting course and am glad to say we were able to implement a songwriting masterclass the same semester.

What happened in the masterclass?
Everyone came in pretty new to songwriting, so we first analyzed work by songwriter-artists such as Julia Michaels, Lin-Manuel Miranda, Aitana Ocaña and BTS. Talking about rhyme, imagery, scansion, genre specifics and production can get a bit dry, but spelling out the concepts is useful when you're starting out. By week two, the songwriters were writing their own original songs. I gave them brief listening assignments, mostly to get them out of their Spotify playlists, suggested improvements and connections in their material, and also brought in guest artists for feedback and encouragement: Raye Zaragoza, an internationally touring activist-singer-songwriter, Redddaz, a producer-songwriter who recently performed with Jamie Foxx, and Andre Catrini, a musical theater songwriter with a production going up in the UK this spring. Less than a week after the last class, some of the songwriters performed their new songs at Roulette.

What is your favorite part of working with Face the Music?
The songwriters constantly delighted and surprised me with their initiative, creativity, work ethic and understanding. What really impressed me was the depth of the material they brought in. A shortcoming of human perspective, I think, is the tendency to overlook, unconsciously invalidate, or even outright dismiss the experience of other people, especially those we consider less knowledgeable than us. The writers brought in deeply personal work, singing of their experience with first love (or crush!), struggles with depression, or desire to change a deeply flawed world. They're sophisticated and concerned about very mature, significant things; they're enthusiastic, scared and willing to rise to challenges. We're privileged to have the opportunity to talk about it all, to take time every Sunday to put their experience into words – and in doing so, acknowledge their emotions and mental health in an intuitive, joyful process.

Why is it so important for aspiring teen musicians to have mentors such as yourself and Face the Music’s other coaches, composers and conductors?
I think mentorship is important, period. Not only for the less experienced, but also for the mentors. It's a symbiotic relationship. Generosity of heart, patience with oneself and others, courage, sensitivity, vulnerability, morale, faith in oneself, understanding and, of course, one's personal barometer for excellence – all of these flourish and strengthen when we choose to learn. (Having said this, those who are more experienced can, and should, protect those they are leading from the perils of the path.)

Music can get competitive; mentorship is as much about character realignment and perspective adjustment as it is about encouragement and specifics of the craft. In the larger picture, humans make much better progress with help from one another. There's room for everyone's best version of themselves; the world needs everyone's best version of themselves.

Do you think it’s especially important for young musicians who are female and/or people of color be mentored by artists who look like them and may share aspects of their experience?
There's so much that's been said on this, so I'm going to offer a slightly different angle. Humans are imperfect; we all have blind spots. Historically, we've perpetuated the idea that one particular kind of person is a leader, a superhero, the epitome of beauty, someone worth listening to just because. We also continue to make the mistake of believing those at the top, especially in entertainment, are infallible. I think we need to both teach and learn while pushing for true diversity – not just the optics of diversity, but actual diversity – and practicing discernment.

I believe that musicians are mentors to the audiences we perform for. If we appear in front of a hundred, a thousand, or millions of people, we are in a unique position to change others' perspective, even about themselves. Not through didactic art... Maybe just by virtue of singing our truth, simply and understandably.

As a mentor, what is the most important thing you’d like the students to come away with?
All songcraft aside, I'd like the writers to be more connected with the electricity of their intuition. (Speaking as someone who used to practice six hours a day, the training does tend to disconnect you from that part of yourself.) It's powerful and rarely, if ever, wrong. I also hope I gave them a bit more courage to try things that scare them, artistically speaking. That's how you grow – and especially how you increase your range.

Adrianna Mateo has opened solo for Alicia Keys, performed as a violin soloist at the United Nations General Assembly, sung on both the Late Show with Stephen Colbert and MTV, written and recorded original songs at Jungle City Studios, and acted at the Met Opera, with recent film credits at the Independent Television Festival and New York Short Film Festival. She is writing her first musical at the Dramatists Guild Foundation.