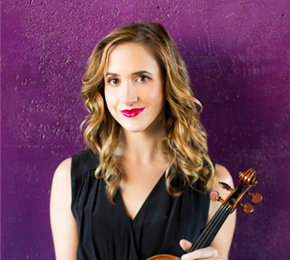 Born in Philadelphia, Pennsylvania, violinist Emily Kriner has performed throughout the United States, Canada, Central America, and Europe. Emily earned a Bachelor of Music degree from the Cleveland Institute of Music, with a minor in Psychology from Case Western Reserve University and a Master of Music degree from the San Francisco Conservatory of Music. Her teachers include Linda Cerone, David Updegraff, Ian Swensen, and San Francisco Symphony members Catherine Van Hoesen, David Chernyavsky, and Melissa Kleinbart.

Emily is a co-founder of the unconducted orchestra, One Found Sound and was a member of the San Francisco Chamber Orchestra. She has appeared as soloist with the San Francisco Academy Orchestra and Lake Tahoe Music Festival and has performed at a variety of venues and concert series including Herbst Theater, the Kimmel Center, SF Performances and SFJAZZ. She has held various chamber music residencies such as at the Banff Centre, New Music on the Point, and Avaloch Farm Music Institute and has performed at many festivals including Spoleto USA, National Repertory Orchestra, St. Lawrence String Quartet Seminar, and the Aldeburgh Festival Britten-Pears Young Artist Programme.

Emily is dedicated to performing new music and has worked with a number of established and emerging composers including Ashley Fure, Tania León, Christian Wolff, and Aleksandra Vrebalov. She has performed alongside Ursula Oppens and has been a featured performer for two consecutive years on the Kronos Quartet Festival. With an equal commitment to historical performance, Emily is a founding member of the baroque ensemble MUSA and has performed with the San Francisco Bach Choir, the American Bach Soloists Academy, the Santa Cruz Baroque Festival, Berkeley Fringe Baroque Festival and Early Music America’s Young Performers Festival. Her baroque violin teachers include Julie Andrijeski and Elizabeth Blumenstock. In addition to her classical work, Emily has collaborated and performed with various popular artists including Michael Bublé, Sarah Brightman, Kygo, Third Eye Blind, Journey and Magik*Magik Orchestra. She has performed at iconic venues such as The Fillmore, The Greek Theater, and Masonic Lodge at Hollywood Forever and can be heard on a wide range of albums and feature film scores.

Emily is a devoted and passionate educator. Her teaching focuses on building a strong technical foundation while fostering confidence, independence, and a love for the learning process. She was a violin teaching artist at the Enriching Lives through Music program, a teaching fellow in Belize with MusAid, a chamber music and sectional coach for the Palo Alto Chamber Orchestra, and on faculty for the String Quartet Camp at the San Francisco Community Music Center. Emily is a registered Suzuki teacher and has a private teaching studio in Brooklyn, New York.