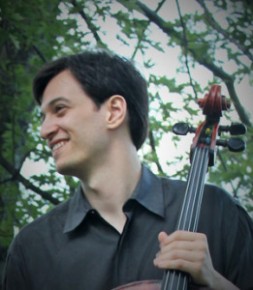 Born in New York City, Mark Humburg started playing the cello at the age of 5. He attended LaGuardia High School for the Performing Arts as a cello major, winning the Chamber Music Society of Lincoln Center’s Young Artists Competition. He graduated from Mannes, the New School for Music, a student of Wolfram Koessel and Fred Sherry. Mark completed his Suzuki teacher training at the School for Strings, under the tutelage of Pamela Devenport.

He performs regularly in major halls, including Carnegie Hall, Avery Fisher Hall and Alice Tully Hall at Lincoln Center, and the Weill Recital Hall at Carnegie, as well as various venues overseas in Germany, Holland and China. He is prominently featured on the CD Irreverence, and composer Allen Shawn’s Cello Music, among others. He has been a faculty member at the Winter Harbor Festival in Maine and is director for a chamber music series in Long Island City. He recently performed on Chinese national TV.
Mark is also a faculty member at the Brooklyn Waldorf School and the Brooklyn College Prep Center. After music, Mark’s hobbies include reading science fiction and fantasy novels, archery, and a fascination with languages. Mark plays a cello made in 1900 by Richard Henry Knopf.