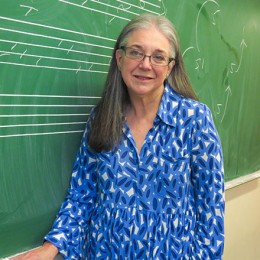 Music is Not a Spectator Sport

“Singing seems to make people happy,” says Liz Fleischer. After 35 years teaching her acclaimed Sight-Singing classes at Kaufman Center's Lucy Moses School, she’s in a position to know. Recognized as “a sight-singing teacher who gets results” in The New York Times and “one of New York’s great teachers” in New York Magazine, Fleischer has developed a uniquely effective approach that uses singing as the medium for teaching basic theory and musicianship.

Fleischer first began teaching Sight-Singing when she found that the students in the keyboard improvisation classes she was teaching represented such a wide range of levels that it was difficult to group them in classes where they could learn effectively. Focusing on Sight-Singing enabled her to use singing as the medium for musicianship, starting everyone with basic skills that were fun and active. “The second I started teaching everyone to sight sing," she says, "everything became fun.”

Fleischer believes that the standard music curriculum, which most often combines Sight-Singing and ear training with theory, doesn't necessarily produce the strong reading skills needed by singers. While a strong theory background is important, she's found that using singing as the basis for teaching produces excellent results. "By separating out Sight-Singing from the mix, it has been possible for me to provide a much more single-minded, pragmatic approach strongly allied with performing," she says. "Like learning to play a team sport well, the system relies on skills in context along with strategy and judgment." And most importantly, she gets people singing from the first class.

Fleischer grew up in a house filled with music. Her jazz pianist father, who played with the likes of Django Reinhardt, made sure she knew her way around the keyboard, and on long road trips the family sang Bach inventions or countermelodies to jazz standards. Fleischer credits this early training with giving her some of the most important tools in teaching and arranging. "I learned the musical language the way bilingual children do, with little need for grammar or theoretical understanding. Years later, when I began to think seriously about teaching Sight-Singing, it was this 'native speakers' model I turned to again and again for direction."

Understanding that her family considered music a wonderful hobby rather than a livelihood, Fleischer initially resisted choosing it as a career. “Going into music was never my plan. I fought it,” she remembers. She attended Juilliard Prep as a child and had studied at the New England Conservatory for two years when she realized that she didn’t want to be a pianist. “I didn’t belong in a conservatory,” she explains. “I couldn’t stand being in a practice room all day by myself. It's ensemble playing that had always drawn me to music.” After earning a degree in psychology and music from Columbia and a master's in music teaching "just in case," Fleischer worked as a keyboard player and composer with dance and theater troupes and taught musicianship to dancers at Barnard College. At the same time, she began teaching keyboard improvisation at the Hebrew Arts School—which later became Lucy Moses School—for Kaufman Center founding director Tzipora Jochsberger. “Tzipora was a master teacher herself and knew how to structure a school so that transformative things could happen in the classroom, and I got hooked,” she explains.

Sight reading opens doors for both professional singers wading through vast quantities of repertoire with little preparation time and amateurs auditioning for choral societies, explains Fleischer. "Strong sight reading skills give singers real independence, enabling them to choose their own repertoire, learn at their own pace and face reading auditions and first rehearsals with a level of confidence." Originally designed for avocational singers, the course quickly attracted professionals from Broadway along with theater and opera people, and instrumentalists working on their musicianship skills. While Fleischer occasionally sees her students on posters outside Carnegie Hall, she emphasizes that many are amateurs, and the classes are for everyone.

"I have always believed that it's a real shame to turn music into a spectator sport," says Fleischer, "particularly when you consider the innate aptitude of most people and the intellectual, psychological and social benefits of active playing and singing." “People often mistakenly believe they have too little musical talent to acquire these skills,” she explains. "I’m in the enviable position of letting them know that they're fine, and that these classes will give them new options and possibilities." In fact, most of Liz's students go on to do something fun with their skills.

Unlike learning an instrument, which takes many years of regular practice, reading skills can be acquired fairly quickly. Fleischer is supremely goal-oriented, a quality she feels is an asset in this kind of teaching. "I want to get people trained and out in the field using these skills as quickly as possible," she explains. "With strong reading, even a relative beginner has a chance of singing with a first-rate chorus, reinforcing and building on what they've learned. For instrumental students, performing opportunities may take much longer to prepare for, although playing chamber music is a terrific reward."

Acquiring new skills is always exhilarating, but you can't discount the pure comfort of music making itself. "Performing, teaching and studying music have sustained me through difficult times and brought me tremendous joy," says Fleischer when asked about her teaching philosophy. "If anything, I'm committed to sharing that joy with as many people as I possibly can. Is that a philosophy?"

--From Kaufman Center's In Harmony newsletter